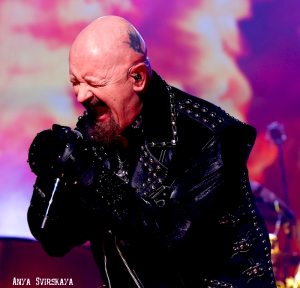 For 49 years, Heavy Metal Gods Judas Priest have been “Delivering The Goods” to countless fans throughout the world. Beginning March 2018, Rob Halford and company started the first leg of “Firepower” tour. The new album “Firepower”, is heir 18th album. “Firepower,” recently debuted at #5 on the Billboard 200 chart, making it the band’s highest-charting album in the US.

With a successful album backing them up, the time was right for Judas Priest to embark on a tour with a coupe of reputable bands. Having heavy metal legends Saxon and The Black Star Riders as opening acts filled out this bill nicely.

Sadly, Judas Priest is currently without Glenn Tipton, due to his recent diagnosis of Parkinson’s Disease. Unfortunately, this disease affect his motor system, making him unable to play guitar. In his place is Andy Sneap, who Glenn personally requested as his replacement. He’s no Glenn, but he was a fine addition to the band.
The sold out show took place in Long Island, NY, at Nassau Veterans Memorial Coliseum on March 17th. The night started out with the song “War Pigs” playing through the house speakers. 30 seconds into the song, the stadium went dark, as the flame color scheme of the stage lights manifested itself.

They opened with their new single, “Firepower,” followed by the classic, “Running Wild.” They followed these well known songs with a deep cut, “Grinder.” Many classics like “Turbo Lover,” “Breaking the Law,” and ‘Hell Bent for Leather,“ were performed to perfection. Giant LED monitors flashed artwork and videos representing each song. We got to see Halford on his motorcycle, but unfortunately, he didn’t interact with the audience much during his performance. Maybe the technical sound glitches were the reason. Unfortunately, the sound dropped out 2 or 3 times during the show. Even with the difficulties, Judas Priest soldiered on. They are a constantly professional band. Halford, at age the age of 66, still has the pipes and stamina. This tour will take them into August so catch them while they’re still rocking.