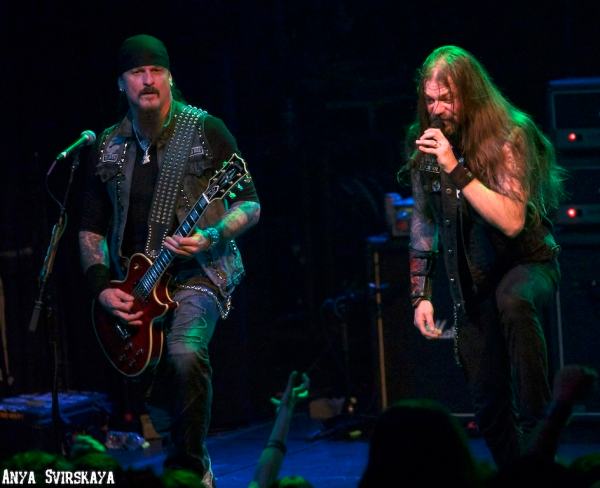 Iced Earth is currently touring in support of their newest album, “Incorruptible.” During the first leg of their tour, they performed their only tri state Area show at New York City’s Gramercy Theatre. Supporting the band during this tour are Sanctuary and Kill Ritual. Since Matt Barlow and Iced Earth parted ways in 2011,Stu Block has been their vocalist. With three Iced Earth albums under his belt, it is safe to say that Stu Block and Iced Earth have jelled well, and on March 22, it truly showed. The evening’s performance was sold out, the audience had a thirst for the power metal sound of Iced Earth.
Before the main attraction, Sanctuary was also the co-headliners.The band is still reeling from the loss of their vocalist, Warrel Dane, which left many questions on the band’s future. On the band’s social media, they announced they will pay homage to the memory of Dane and will tour with guest vocalist Joseph Michael, from the band Witherfall.

Following that, Kill Ritual ( the opening act ) performed their set. They are on the bill performing to promote their album, “All Men Shall Fall.” They opened the show with a very tight set. While still green, guitarist Steven D Rice stylistically shows a magical, meticulous, musicianship on the fret board. David Watson, a journeyman, is determined to be heard, and isn’t planning on leaving soon. While Kill Ritual is somewhat of a super group, they still have a youthful energy to their sound. I would like to see them headlining soon. The excitement displayed tonight needs to be witnessed again.

Sanctuary sounded vibrant throughout their 45 minute set. The band focused on classics such as “Die for my Sins,” and ‘Battle Angels.” While the sound is very different with Joseph on the microphone, the audience appreciated him showing his high register vocal abilities with songs like “Soldiers of Steel” and “Taste Revenge.”
As the crowd chanted “Iced Earth! Iced Earth,” the lights dimmed. The first song of the night, “Great Heathen Army,” set the tone for the rest of the evening. I was Expecting to hear music from the past three albums, but I was pleasantly surprised to hear ‘BurningTimes.” Stu Block did his best Matt Barlow’s low and mid range vocals, but adds highs in attempt to claim the song. Stu Block excels better with songs like “Dystopia” and “Seven Headed Whore.” These are songs that he was instrumental in creating. His charm has always been sincere. You can see he is truly happy being in Iced Earth. Every time the band addresses the audience, he is the first to show love to them and to his band members.

The magic ingredient between guitarist and founder Jon Shaffer is apparent with this current Era of Iced Earth. “ Vengeance Is Mine” and “I Died For You” show the bands past. We did see Jon Schaffer sing the classic ‘Stormrider,” which is always one of the highlights of the night. For some reason, none of the material from the “Plagues of Babylon” album was chosen tonight. We were treated to the 10 minute epic song “Clear the Way (December 13th 1862).” Songs like this highlight the entire live band, and show Jon Scahffer’s love for American History. As the band did its final encore, the audience had an electric atmosphere as Stu Block talked about loss and hardship. In a sign of hope, a future generation of metal heads walked their way to the stage. Children probably no older than 12 stood behind Stu Block as he spoke to the audience. The band and the children did a beautiful rendition of “Watching Over Me,” which left the crowd high on emotion. Currently, Iced Earth is creating its most intense music, and I encourage everyone to seek them out , buy their CD’s and T-shirt’s. Support one of the most underrated bands in North America.