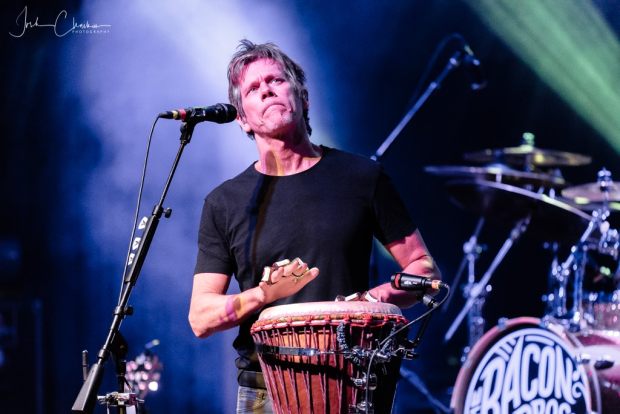 Saturday brought the Pit Crew back to the riverboats, but no gambling or buffets for us, though we did have a big helping of Bacon. Hollywood favorite, Kevin Bacon, was in town with a band he had formed with his brother, appropriately named The Bacon Brothers. For those who only know Kevin from his work on the screen (and who can connect him to any other actor in 8 films or less), seeing him onstage making music would come as a surprise.

The music bug has long been there, though. Even after spending years in cozy Hollywood trailers, Kevin described the thrill he had when first getting on board a rock tour bus. Kevin also described coming up with the song Beneath Perfection, when he was working on a film of the same name, imagining the film promoting his music, and the album selling millions of copies, making him lots of money…only for the film to be renamed Tremors. Apart from those brief snippets, Kevin’s fame as an actor went largely unspoken, leaving the music to do all the talking for them.

Kevin and Michael Bacon have been playing music together since they were children, but have only been working together as a band since 1995. Two decades is plenty of time to carve out a sound, and hone ones craft…the brothers excelled at that. Both Michael and Kevin share vocal duties, trading off between songs, and both brothers are multi instrumentalists, with Kevin on bongos, guitar, and harmonica. Unfortunately, the urge to even tease Footloose was resisted, so no cover of that 80’s hit was played.

As a child of the late 80’s and 90’s, it was a thrill to see Kevin in person, but it cannot be understated that he deserves to be treated as a serious musician. Most people in attendance seemed to be very familiar with the catalog of music, and many that I spoke with had seen the band before, when they were doing a free street show downtown KC some year’s ago.

I must admit, I wasn’t aware that Kevin had a band until recently, but a quick peak on YouTube showed that I’ve been missing out, as were those who failed to fill the empty seats in Harrah’s VooDoo lounge on Saturday night. The brothers were self-deprecating, dedicating songs to the people who have to live with musicians and songwriters, rather than the aspiring artists themselves.

All told, Kevin and his brother are a solid duo, with a solid backing band. Though not normally a country fan myself, I found myself highly engaged through the evening, walking away humming the songs I heard, and with a craving for a fried, breakfast meat.

2018-07-18
Josh Chaikin
Previous: St. Paul and the Broken Bones or It’s Cooler in the Summer If You Got Some Soul
Next: Severe ‘Storm’ Alert with ZZ Ward and Special Guest Devon Gilfillian