Ottmar Liebert is one of the most popular flamenco-style guitarists, yet he doesn’t like to place himself in that genre. Instead, Liebert infuses flamenco techniques with his own style that borrows from non-stringed instruments and genres you’d never imagine he’d listen to. Born in Cologne, Germany to Chinese-German father and Hungarian mother, he began playing guitar at 11, and traveled extensively through Europe and Asia intent on fully absorbing each musical tradition he encountered. After pursuing his Rock and Roll dreams first in his native Germany and then in Boston, he abandoned the frustrations of the East coast and settled in Santa Fe, New Mexico. Liebert has since become one of the most successful instrumental artists of the past decades, dedicating his life to intense study and experimentation of flamenco oriented guitar while thrilling audiences throughout the world and releasing an impressive catalog of classic recordings.

Last Saturday we embarked on a journey of stylized “Nouveau Flamenco” through Ottmar Liebert’s music, as we attended his show at the Amaturo Theater at the Broward Center for the Performing Arts. We arrived at the parking lot around 7 PM, from there we took a small walking bridge to the second floor of the main theater, and we were guided to the entrance of the adjacent building where the Amaturo Theater is located. Being our first time visiting this venue we were gladly surprised to discover the intimate and inviting setting: a small theater (probably about 590 seats) with a beautiful and contemporary design, and what later revealed to be an outstanding sound system. There was not a single bad seat in the house, and ours were hard to beat: seventh row, center. 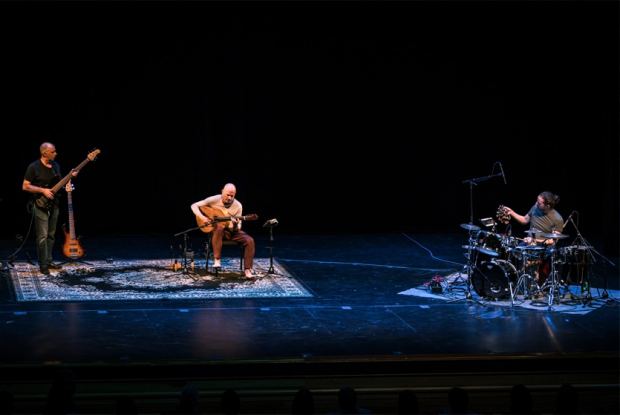 The show started right on time. The first to appear on stage was the percussionist and drummer Chris Steele, then the bassist Jon Gagan stood to the left and finally, amidst a very welcoming ovation from everyone present Ottmar Liebert came out from the shadows and sat in a chair between his two musical partners. The barefooted guitarist looked soulful and peaceful as he started playing with an impressive poise the haunting southwest border-country flamenco melody he and his band Luna Negra are famous for. During the first 5 songs, the trio played song after song allowing only a short interlude for applause, and boy! we were applauding. Although Liebert’s guitar was the focal point, the audience could still enjoy a variety of textures and rhythms by bassist Jon Gagan and percussionist Chris Steele, including a drum solo that ended with a thunderous cheering. Right after, Liebert took on the microphone to introduce us to a second part of the show in which we were about to enjoy various reggae-infused interpretations from his 2015 album “Waiting n Swan”. Discovering an underlying similarity between the flamenco variation known as tango and reggae, Liebert managed to maintain the melodic structure of the originals, complementing them with his unique embellishments and improvisations.

Part of this second set comprised Bob Marley’s hits like “No Woman, No Cry” and “Could You Be Loved” done with his trademark style and alluring delicacy, intertwined with the relaxing tempo of his songs from his most recent album “Slow”. He introduced the music of the latter record by saying “Sometime in 2015 I decided to record an album by myself, without the band, and knew that I wanted to create slow music. Love whispers and hate screams, and I decided to whisper very softly. I made all the music on this album with one guitar and one microphone. Working by myself in the studio felt like writing a very personal diary, and while thinking of the cover art one day I saw a snail crossing in front of my eyes and knew that would be the perfect artwork for the album” – The audience laughed – “I hope that some of you will switch your devices into airplane mode and let this music take you on a flight“. Time flew listening to this great guitarist’s passion and virtuosity and in a blink of an eye our time of delight came to an end as the trio stood up, revered and went behind curtains under a rain of applauses from an audience thirsty for more. After a couple of minutes they re-appeared on stage offering one more song, acclaimed, and cheered after its ending for more than three consecutive minutes.

Earlier in the night Ottmar had met the fans in a formal Meet and Greet session, nonetheless we were given the opportunity to go backstage and talk to him for a while. Once inside, Ottmar greeted us with enthusiasm and kindness. We started talking about my husband’s Cuban roots and he immediately showed additional interest and they engaged in a conversation about the influence of Arabic rhythm on Latin music, and how reggae and tangos flamenco are deeply connected by the avoidance of beat. Ottmar went on explaining he has read that some authors believe the Caribbean rhythm was brought to the Spanish port Cadiz by sailors from merchant vessels, and that the catchy rhythm soon traveled to Andalucía, where it blended with local musical styles and became Tangos Flamenco. It was a very interesting talk, and he graciously gave us a singed CD as a gift and posed with my husband for a picture.

Many like-minded guitarists have traveled the path that Liebert originally blazed, yet he remains exclusive in his own right: with impeccable technique, agile and articulate finger-work; his charming and luscious interpretations drenched in authentic flamenco melodies and upbeat acoustic guitars will easily convince any new age or pop listener that they had discovered something mysterious and exotic, which is well worth checking out.