Ah, Rockfest. For the past 25 years, Kansas City’s rock station, 98.9 The Rock, has put together what has become North America’s largest one day music festival. While most people would agree that the 25th anniversary is worth celebrating, and a look back on the past 25 years is wholly appropriate. That Rockfest brought in many acts that have played here recently in Rockfests past, some as recently as two years ago, is part of a pattern that has caused many to stop attending.

Other festivals which are part of the “World’s Loudest Month” got talent like The Offspring, or Metallica, Kansas City has to wait, and hope, for their headline tours to hit Kansas City, a complaint shared by many. In spite of this, Rockfest continues to shatter attendance records every year, even moving to a new venue that can accommodate 70,000 rockers, with much better parking, and indoor restrooms. 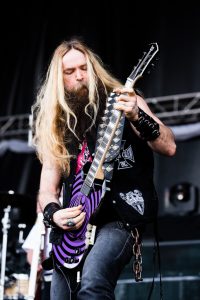 It wouldn’t be a festival without some scheduling mishaps; and, thankfully, there were few this year. Local band Watching the Fall took the Worth stage at noon, while Zakk Wylde was scheduled to play the national anthem at that time. He ended up playing at 12:30; but one small change like that wasn’t enough to torpedo the day.

Rockfest did do a good job of showcasing a variety of acts, including local favorites Sidewise, who have started to gain a national following, thanks to an appearance on Shiprocked, and tours with Sevendust, and Godsmack. Seriously, if you don’t have their album Made of Matches, you should pick it up now. I’m told there might even be a new album in the works…

Tom Keifer, frontman for 80’s hair metal band, Cinderella never played at Rockfest, to my knowledge (I don’t see them on the Rockfest lineup history anyway). Tom did a great job of commanding the stage, even doing a soulful rendition of With a Little Help from My Friends. And, yes, Lzzy Hale did join Tom onstage for Nobody’s Fool. Unfortunately, there are no photos of that performance.

Being at a larger venue is great for more capacity, but the distance between stages was that much greater, so if someone wanted to catch every act, a good few miles would be put in before the end of the day. Like in previous years, jumbotrons were posted at each stage, so concertgoers could watch the action live, and the sound system seemed to have worked much better too. While the VIP seating went from a shaded platform at the side of the stage to an elevated platform, a VIP tent was open this year that had air conditioning. The only thing that could have made that experience better was having TVs in there, so people wouldn’t have to choose between cooling off, or watching the show.

Now and then, Rockfest will bring in a “specialty” act to perform; two years ago, Tech N9ne took the stage, this year, southern rock/country band, Blackberry Smoke was that band. They were a tad too country for my tastes, but they were well received.

https://www.stephen-pearcy.com/ Back on the Trane stage was Ratt. One masked man in the crowd tried several times, unsuccessfully, to start off a “Ratt! Ratt! Ratt!” chant. Undeterred, he proved himself to be the biggest fan at the festival.
At 60 years of age, Stephen Pearcy was quite energetic. Playing hits such as Lay it Down and Round and Round. They no longer have that “80s hair”, but they still sounded just like they did back in 1984!

All the way from Pennsylvania, Halestorm was next on the lineup. Halestorm consists of Lzzy Hale on lead vocals and guitar, her brother Arejay Hale on drums, her on again-off again boyfriend Joe Hottinger on guitar, and Josh Smith on bass. They are no strangers to Rockfest as they were just in KC a couple of years ago, and perform hundreds of shows every year. Lzzy and Arejay have been writing and performing since 1997. With hits such as I Miss The Misery and I Get Off, they sure got the blood flowing!

https://www.facebook.com/volbeat/ Volbeat is all the rage these days. The hits just keep on coming! The sun was just starting to set when they took the stage. Their unique Danish sound combines rock, metal and rockabilly. Volbeat, also, seem to be regulars at Rockfest. Michael Poulsen was slightly under the weather – he could be heard clearing his throat between tunes. However, that did not stop them. They sounded really, really good! You can’t go wrong with Still Counting!

https://www.facebook.com/SammyHagar/ How about legendary Sammy Hagar?! He already had a name for himself as a solo artist, and his work with Montrose before joining Van Halen. Believe it or not, Sammy performed at the very first Kansas City Rockfest 25 years ago. Even at 69 years old, he looked and sounded like he was 29. Sammy was joined by his band The Circle, which includes original Van Halen bassist, Michael Anthony, who also looks incredible at age  62, proving that either the fountain of youth is in Cabo, or tequila and whiskey actually slow the aging process. Drink up!

Sammy was running around the stage and playing his hits such as I Can’t Drive 55, Heavy Metal, and Right Now (a classic song he wrote for Van Halen back in the early 1990s). Sammy rocked non-stop for over an hour!

Jason Bonham, son of legendary Led Zeppelin drummer, sat in on drums, so a few Zeppelin songs were in order.

https://www.facebook.com/Godsmack/ Last but certainly not least was Godsmack. Sully, Shannon, Robbie and Tony went on stage around 10:40pm and rocked it til about midnight. Sully knows how to work the crowd. After twelve hours of nonstop rock, with people passed out on the ground, he was still able to get us all riled up. They always put on an epic show with lights and pyrotechnics. At the end of their set, the crowd still wanted more so they came back out for an encore! They announced that they will be coming out with a brand new album in 2018. All in all, Rockfest 2017 was one for the record books. The weather was perfect. The lineup was excellent from top to bottom. We had a fresh new venue with room to move around. The night ended, as always, with a great fireworks display. I’d heard rumors that this year’s Rockfest was going to be the last; but if Johnny Dare’s comments at the end of the festival were any indication, we can look forward to 25 more.Can’t wait til next year!

2017-06-05
Josh Chaikin
Previous: Louder than Life 2017: Bands not to miss
Next: Ann Wilson Presents Heart-felt Tribute to Her Influences, and Hits