Michael Schenker Gets the Band Back Together in NYC 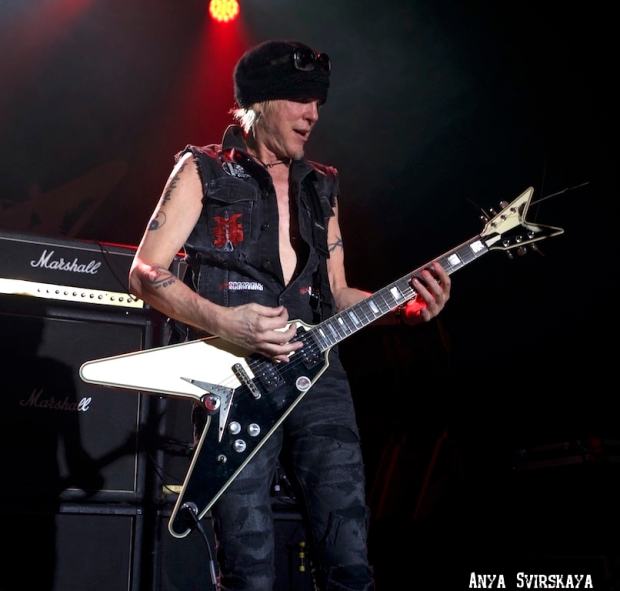 Guitarist, music legend, and icon Michael Schenker performed another sold out show at NYC’s Irving Plaza. Dubbed “the Michael Schenker Fest,” the event features the 4 different singers from the different eras of his career. The tour also coincides with the release of his “Resurrection”  album. This is a two and a half hour event, which showcases past work,  as well as current material.

The evening Started with the original singer for The Michael Schenker Group, Gary Barden, who delivered six of the thirty songs on this tour. He Opened with “Into the Arena,” and we could already tell we were in for guitar solos that have inspired many of our guitar heroes today. Ending his portion of the set with the song “Armed and Ready” felt like a moment coming full circle. He handed over his microphone duties to Graham Bonet, but it wasn’t the last we’d see of him.

Many music fans will know the second vocalist, Graham Bonet, for his time in Rainbow, his only recording with Michael Schenker is the album “Assault Attack”. The 70 year old singer still has an amazingly powerful voice, and he wowed the audience with songs such as “Desert Song,”  “Searching for a Reason,” and of course “Assault Attack.” Time has not slowed him down, and he is a vocalist who has truly managed to maintain and preserve his vocal ability.

Robin McAuley has worked with Michael Schenker under the McAuley Schenker Group, and with the more recent Temple of Rock, filling in tour dates back in 2012. The 65 year old opened his portion of the concert with “Bad Boys.” The vibrant McAuley gave us musical gems such as “Heart and Soul,” and “love is not a game.” We often hear about guitarists having bad relationships with vocalist, yet here we have 4 vocalist and 1 guitarist. It is a true testament  to the attitude and behavior of Michael Schenker. He’s all about the music and always showing an honesty and transparency in his playing. There is Zero ego in his presence, and yet he is a guitarist who should be mentioned along with the likes of Tony Iommi and Jimi Hendrix.

McAuley passed the musical baton to Doogie White, the current  voice in the Michael Schenker lexicon from Temple of Rock. Without any hesitation, Doogie goes into “Searching for Freedom,” “Live and Let Live,” and “Vigilante Man”.

As the night was drawing to a close, we were treated to all 4 vocalists singing “Warrior.” Of course, a Michael Schenker show is never complete without him acknowledging his humble beginnings when he was in U.F.O.

All 4 singers jumped into classic songs like “Doctor Doctor,” “Rock Bottom,” and “Lights Out” to close the show.

Seeing all of these incredibly talented musicians in solidarity is a once in a lifetime opportunity for any Michael Schenker fan.

(If you’re a fan of Robin McAuley, be sure to check out our coverage of Las Vegas production, Raiding the Rock Vault, where he’s one of the regular performers.)