Zakk Wylde Leads Beserkers into the Battle for Canton Hall 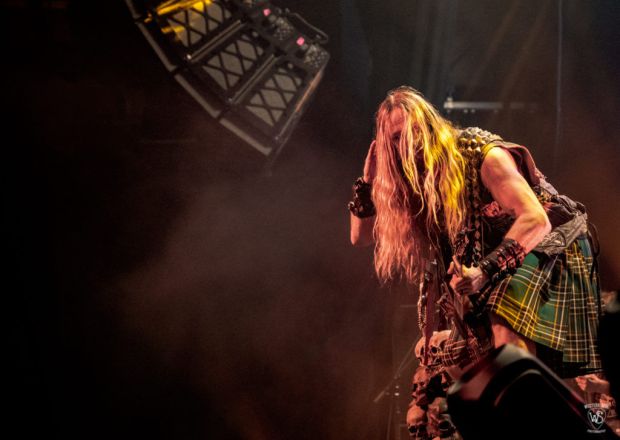 As I approached Canton Hall in Deep Ellum that is a great little neighborhood with lots of great attractions and music venues everywhere in Dallas, Texas. As I came closer to the venue you could see people standing in all directions on the streets lining up waiting for the doors open. They were all waiting patiently for the doors to open to begin the night of Sonic Brewtality! You could tell that all the fans were there to see Zakk Wylde the ultimate Berserker and his band Black Label Society! There were Black Label Society vests in every direction as I approached Canton Hall. On my way in the door to go in and get this night started I walked up to the ticket window at Canton Hall and I noticed the NIGHT ONE SOLD OUT sign on the windows in big letters.

Upon entering the venue there was already and large number of fans on the inside milling around, getting drinks and buying merch waiting for the first band The Atomic Bitchwax to go on and kick this night off with some extraordinary music!  The Atomic Bitchwax took the stage and immediately started off with some very heavy and fast music with a little progressive rock sounds thrown in the mix with both the bass player and guitarists performing vocals. This three-piece band might look familiar if you see them as they are also members of the Heavy Metal band Monster Magnet. These guys killed it on stage that night and played a great set even though they could not move around very much because of a real crowded stage that night. If you ever get a chance to see them I would highly recommend seeing what these guys are all about.

The band up next was Conan a trio out of Merseyside Northwest England. We were getting a little taste of their music and they finished setting up and you could tell it was fixing to get heavy! By this time the crowd was growing larger then when I first got there. The crowd was waiting patiently as they finished getting set up to take us one step farther into the amazing night of heavy metal music. This amazing trio from England is characterized as being heavily distorted and playing in a down tuned sound. They are also labeled as being caveman battle doom and these guys are nothing short of straight heavy metal loud music for their entire show and you could also feel the music not just hear it when these guys played. They were definitely there to get you one step closer for the night of Doom trooping that everyone was there to do that night. These guys gained some new fans that night at the show, and I would suggest checking them out if you get a chance when they come to your town.

After the opening bands had played and were clearing the stage of all their gear the crowd was at its capacity for the venue and were patiently waiting. Black Label Society’s crew came out and raised the curtain to the roof and the crowd went wild and you knew the show we’ve all been waiting for was that much closer. While they were waiting for Zakk Wylde and Black Label Society to take the stage for a night of Sonic Brewtality, Canton Hall was playing hometown heroes Pantera and the crowd was singing every word! As it got close to time for Zakk and the band to take the stage you could feel the crowd’s excitement climbing. As the band was taking the stage you could see lights moving behind the giant curtain and you knew what was coming next. As Zakk hit the opening riff the curtain dropped, and the crowd erupted with yelling, whistling, applause and throwing the devil horns to the sky as the band joined in. Zakk stepped up on his riser and leaned out towards the crowd with one hand on his guitar and one hand up to his ear listening to the crowd similar to the way the old school wrestlers would do. He asked them to get louder with and they obliged and raised the noise a little more and he soaked it all in and continued with the opening song. They knew this was going to be a night of total Sonic Brewtality since they were playing Sonic Brew from start to finish tonight. Towards the end of the second song Zakk was standing in the middle of his platform on the stage and began raising on hand out to the side as he continued playing his Wylde Audio Signature guitar and with his other hand wanting the crowd to get even louder and rowdier then they already were. As they finished up the second song of the night Zakk let go of his guitar and began raising both arms out beside him and paused for a moment and then began beating his chest as if he was a Viking heading into battle, the crowd went insane with yelling, screaming and whistling to where you could barely hear yourself think any longer about what was going on in that moment! That night from front of Canton Hall in the pit to the very back wall of you could feel every note and every beat pulse through your entire body! If you ever get a chance to see Black Label Society you should go check them out, you will not be disappointed. This is a show I have been waiting to see for a long time and I will be going to more in the future for sure.

Words and Photos by Craig and Paula Youngblood