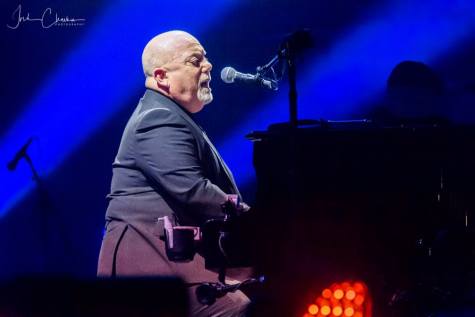 The heat is still here, the leaves are still green, but Pumpkin Spice everything is everywhere, so it can only mean that fall is upon us. With summer drawing to a close, and baseball season going with it, Kauffman Stadium, home of the Royals, hosted its first concert in 39 years. Capacity crowds were clearly expected, with parking opening at 1:00 PM, seven hours ahead of show time, with many showing up early enough to begin tailgating.

With a crowd nearing 40,000 people, Kauffman Stadium was as full as its ever been, with fans coming from all around the country. One excited fan in the front row was waving a sign letting Billy know he came in from Brooklyn. It’s nice to see the lengths some people go through to support their local musicians.

Always self-deprecating, Billy joked that he didn’t expect to look like Dr. Evil by the time he hit 69, before giving his best impression of the Mike Myers character. The movie impressions didn’t stop there, with Joel summoning his best Maximus, taunting the crowd with “Are you not entertained?!” But it was music everyone had come to hear, and Billy certainly delivered on that front.

Though his performance was somewhat shorter than what he had done at the Sprint Center over a decade ago, when I saw him last, he still put on nearly two-and-a-half hour of hits, and “album tracks” (songs that didn’t become hits). But whether sitting while listening to the somber notes of New York State of Mind or waving goodbye to Brenda and Eddie during Scenes from an Italian Restaurant, Billy’s fans were transfixed through the performance, and Billy commanded the stage, and there was plenty of dancing in the aisles. People go nuts for Piano Man.

The concert was as much of a retrospective of Billy’s career as it was a catalog of his hits. Billy told the story of how he moved from New York out to LA, because he wanted to write scores for movies, “But no one was hiring!” So he decided to write his own, and thus The Ballad of Billy the Kid was born. Being a “Jewish kid” from New York, Billy readily admitted that he knew little about Billy the Kid, or the west, and pointed out everything inaccurate about the lyrics after singing the song but, hey – it’s still a great song, and one that should certainly have gotten more play.

As more artists announce farewell tours, or cease touring altogether, the musical landscape begins to erode, as new musicians emerge. Certainly music must march on, and new artists need to take over, but reverence must be paid to the old guard. Though nearing 70, there’s no denying that Billy and his music has been greatly influential to generations of musicians, singers, and songwriters, and he’s still damned entertaining to see.

Without a rock album being released since 1993’s River of Dreams, Billy has proven he’s still a force to be recokoned with. There’s no crying in baseball, but there’s a damn lot of Billy Joel.