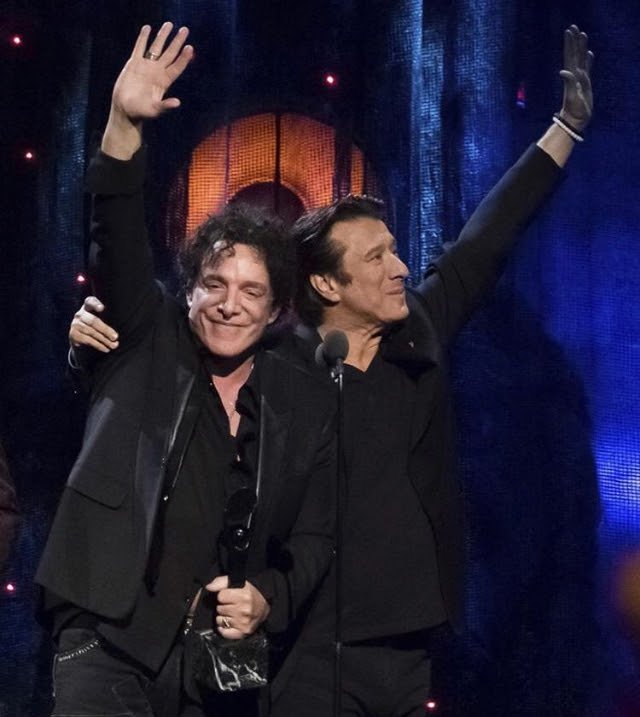 July 24, 2018 – JOURNEY founder and only remaining original member NEAL SCHON, while on the current Journey & Def Leppard 2018 Tour with wife Michaele Schon–who has been at the legendary guitarist’s side for his busy touring schedule for over 8 years and approximately 1000 shows–is paying tribute to former lead singer, STEVE PERRY, with a nightly dedication and moving performance of the band’s 1978 hit single, “Lights.” Co-written by Schon and Perry, “Lights” was featured on the band’s 4th full length album, Infinity, and has become one of Journey’s most popular and easily recognizable songs.

“‘I’ve been hearing that he’s been showing up in the same coffee joint that I go to all the time,’ Schon says. ‘Hopefully I’ll run into him soon. We had a great meeting when we met for the Hall of Fame. I realized there was still a very deep connection there. He’s had nothing but very kind words to say about myself. I’ve done the same for him. The mutual respect is there. One step at a time. I’d just like to get to know him again and see where he’s at. But I can surely tell you that I would love to just have him come and just mess around one day at Narada’s studio with the three of us, because I think we would turn out something that he would really dig.’”

Neal Schon founded Journey in 1972 and has been the only consistent member, having participated in every album and tour to date. Schon is a Grammy-nominated guitarist, songwriter, and vocalist who is not only the founding member of Journey, but was a member of Santana and has performed with a variety of other acts including Bad English, Jan Hammer, HSAS and has released 10 solo albums including his latest Votex. His guitar style has been described as soulful and melodic, admired by such fellow legends as Eric Clapton and Prince, who reportedly asked for Schon’s blessing to release “Purple Rain”, which echoed a similar sound to Journey’s “Faithfully”.

Journey’s worldwide sales have reached over 100 million records, making them one of the world’s best-selling bands of all time, with a wide selection of chart-topping hits like “Don’t Stop Believin­'”, “Open Arms”, “Lights”, “Faithfully”, and “When You Love a Woman”, among others.